Rounding out Intel’s direct GPU-related announcements from this morning as part of the company’s annual investor meeting, Intel has confirmed that the company is also getting ready to deliver a more traditional GPU-based accelerator card for server use a bit later this year. Dubbed Arctic Sound-M, the upcoming accelerator is being aimed in particular at the media encoding and analytics market, with Intel planning to take full advantage of what should be the first server accelerator with hardware AV1 video encoding. Arctic Sound-M is expected to launch in the middle of this.

The announcement of Arctic Sound-M follows a hectic, and ultimately sidetracked set of plans for Intel’s original GPU server hardware. The company initially commissioned their Xe-HP series of GPUs to anchor the traditional server market, but Xe-HP was canceled in November of last year. Intel didn’t give up on the server market, but outside of the unique Ponte Vecchio design for the HPC market, they did back away from using quite so much dedicated server silicon.

In the place of those original products, which were codenamed Arctic Sound, Intel is instead coming to market with Arctic Sound-M. Given the investor-focused nature of today’s presentation, Intel is not publishing much in the way of technical details for their upcoming server accelerator, but we can infer from their teaser videos that this is an Alchemist (Xe-HPC part), as we can clearly see the larger Alchemist die mounted on a single-slot card in Intel’s teaser video. This is consistent with the Xe-HP cancellation announcement, as at the time, Intel’s GPU frontman, Raja Koduri indicated that we’d see server products based on Xe-HPG instead. 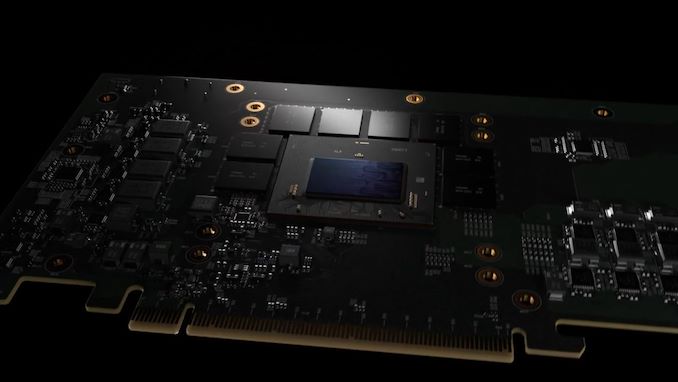 Arctic Sound-M, in turn, is being positioned as a server accelerator card for the media market, with Intel calling it a “media and analytics supercomputer”. Accordingly, Intel is placing particularly heavy emphasis on the media processing capabilities of the card, both in regards to total throughput and in codecs supported. In particular, Intel expects that Arctic Sound-M will be the first accelerator card released with hardware AV1 encoding support, giving the company an edge with bandwidth-sensitive customers who are ready to use the next-generation video codec.

Interestingly, this also implies that hardware AV1 encoding is a native feature of (at least) the large Alchemist die. Though given the potential value of the first hardware AV1 encoder, it remains to be seen whether Intel will enable it on their consumer Arc cards, or leave it restricted to their server card.

Meanwhile in terms of compute performance for media analytics / AI inference, Intel is quoting a figure of 150 TOPS for INT8. There aren’t a ton of great comparisons here in terms of competing hardware, but the closest comparison in terms of card size and use cases would be NVIDIA’s A2 accelerator, where on paper, the Arctic Sound-M would deliver almost 4x the inference performance . It goes without saying that the proof is in the pudding for a new product like Intel’s GPUs, but if they can deliver on these performance figures, then Arctic Sound-M would be able to safely occupy a very specific niche in the larger server accelerator marketplace .

Past that, like the rest of Intel’s Arc (tic) products, expect to hear more details a bit later this year.