Even before the first Pentium era of the early 1990s, PC CPUs were already powerful enough to require meaningful and capable cooling setups to keep their temperatures in check. Although there were configurations that could make it by with passive cooling, most PCs were already relying on active cooling solutions. Not many years later, active cooling not only became a de facto requirement, but the high thermal loads generated by processors required that heatsinks have powerful and noisy fans. The pushback from this increasingly noisy era of computing, in turn, effectively spurred the modern market for high-end passive coolers for use in low-noise (but still high-performance) PCs.

The history of passive coolers for high-performance PCs is not very rich – the physics of heatsinks is a well understood field – but, occasionally, we would see some companies make a valiant effort to produce a passive cooler that would be viable on the open market. There were even instances where manufacturers tried to make the entire PC passively cooled, as Zalman’s effort 20 years ago with the hefty TTN-500AF case. Nevertheless, no solution was long-lived, mainly because the ever-rising power (and cooling) requirements would quickly overwhelm the capabilities of the passive coolers of the time.

But now in 2022, perhaps the world is ready for a change? To answer that question, in today’s review we are having a look at the NH-P1, a surprising passive CPU cooler released by one of the most reputable active PC cooler manufacturers, Noctua.

Having already established their name (and then some) with low-noise active coolers, Noctua has turned their attention to the final frontier of low-noise cooling: passive CPU coolers. And in order to accomplish this, Noctua has built a pure heatsink. A very, very large pure heatsink that’s suitable for CPUs.

Throughout all of their history, Noctua has never made a purely passive cooler before, which makes the NH-P1 a remarkable product from the company. The company has significant experience with cooling with their traditional actively cooled products, but suffice it to say, moving a lot of heat without the help of forced airflow is a much bigger challenge – and one we’re eager to see a company like Noctua undertake . So is the NH-P1’s sheer size alone capable of withstanding the intense thermal loads of modern processors? Let’s find out.

The NH-P1 comes into a well-designed cardboard box, following the same simple artwork that Noctua is using for nearly all of their products. It is an elegant design, focused on delivering as much information as possible rather than flying on striking colors to catch the eye. The sheer size of the packaging hints that the NH-P1 is nothing alike any air cooler we have seen before. Inside the box, we found the cooler very well protected below layers upon layers of thick cardboard packaging. The supplied mounting hardware and extra items can be found in a smaller, compartmentalized cardboard box. 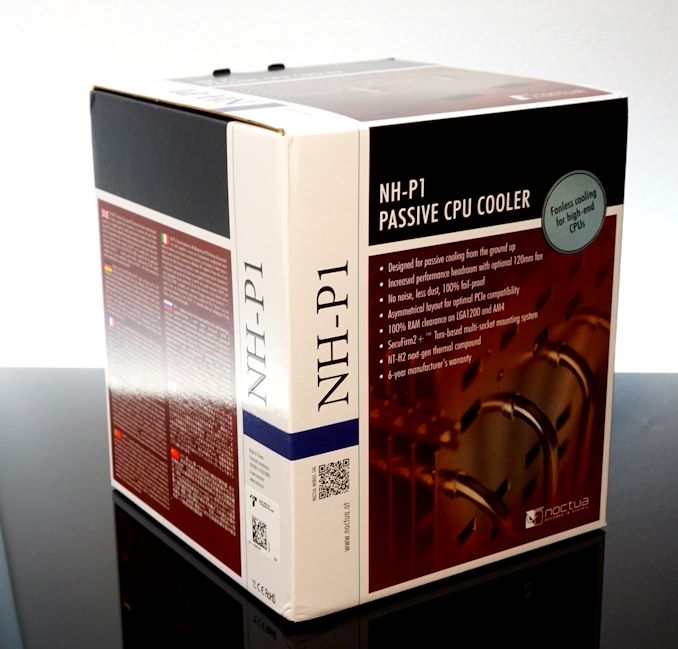 Aside from the typical mounting hardware necessary to mount the NH-P1 onto a CPU socket, Noctua also supplies a nice screwdriver, a tube of NT-H2 thermal grease, and a metallic case badge. And, while perhaps sacrilegious for what’s meant to be a fully passive cooler, there are also two wire holders for installing a fan, should the user ever wish to do that. 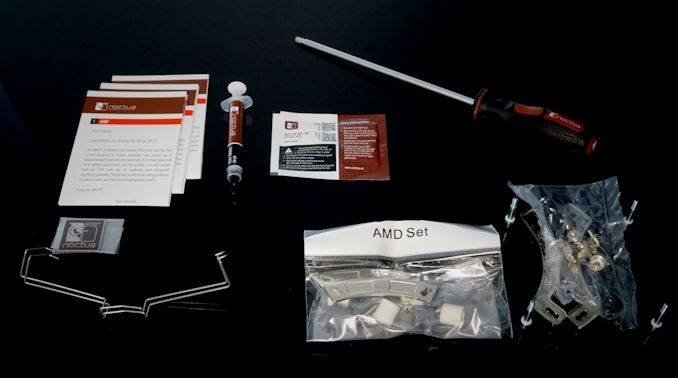 A simple glimpse on the Noctua NH-P1 is enough for anyone to realize that this is a no run-of-the-mill CPU cooler. To begin with, the sheer proportions of the NH-P1 are massive beyond comparison. At 15.8cm x 15.4cm x 15.2cm (essentially a 6.5-inch cube), the NH-P1 dwarfs typical tower coolers – which are already quite large – taking about three times the volume of a fully-assembled NH-U12S. And its 1.18kg weight makes it heavier than some laptop computers.

Considering both the size and the nature of the NH-P1, it is bound to face compatibility issues with both systems and cases, as well as limited compatibility with CPUs. To that end, Noctua provides detailed compatibility tables that include both system parts and PC cases, to help buyers get a better idea ahead of time over where the plus-sized passive cooler can fit.

Case compatibility aside, the NH-P1 supports nearly all modern CPU sockets, including Intel’s LGA-11xx / 1200 socket and latest LGA-1700 socket, as well as AMD’s socket AM4. Threadripper is left out in the cold, however, as it would not be possible for the NH-P1 to handle the extreme thermal requirements such as a high-end processor. 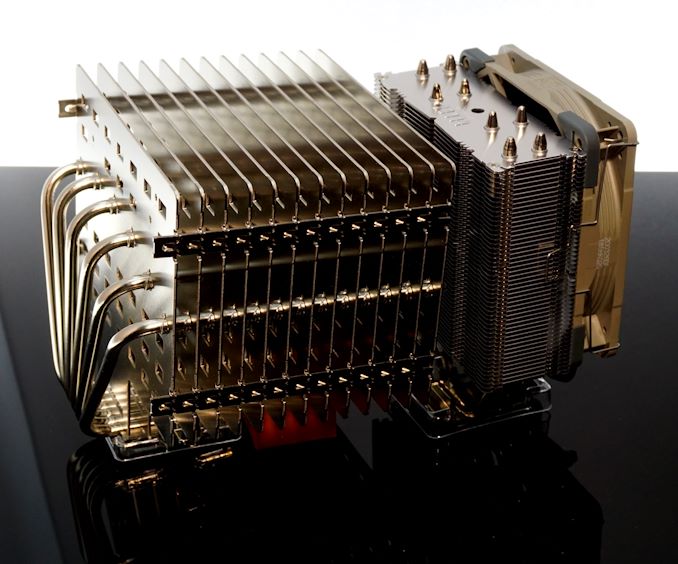 Despite its massive proportions, the NH-P1 sports only thirteen fins. The fin spacing is nearly ten times that of a typical air cooler, and every single fin is perforated with 33 rectangular holes so as to optimize passive airflow. This configuration would make typical cooler fins too thin and flimsy, so Noctua greatly increased the thickness of each fin as well. Finally, the fins are also not pressed onto the heatpipes but soldered, ensuring the long-term mechanical strength of the cooler. 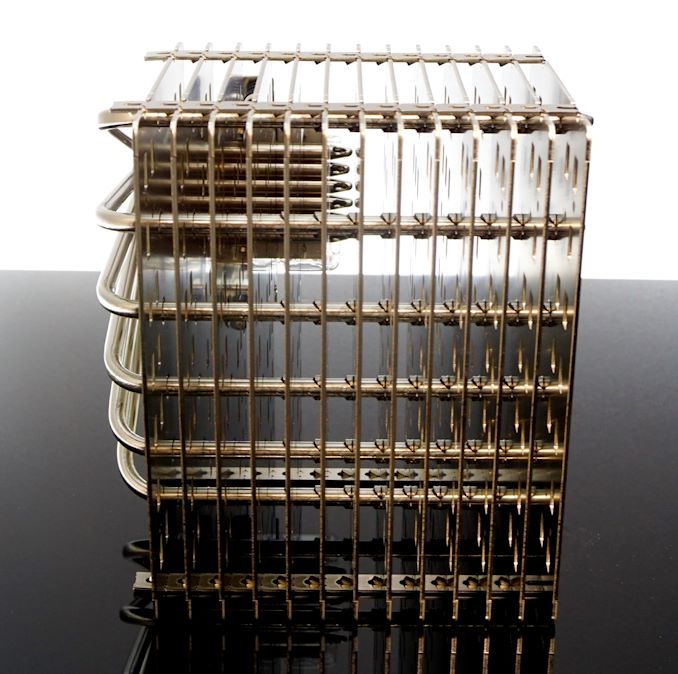 Six heatpipes are responsible for transferring the bulk of the thermal energy generated by the CPU onto the fins of the cooler. The heatpipes start from the base of the cooler, positioned exactly in parallel to each other, and extend to just one side of the base towards the top half of the fins in a symmetric fan pattern. They are made out of copper but are fully nickel-plated to prevent surface corrosion. 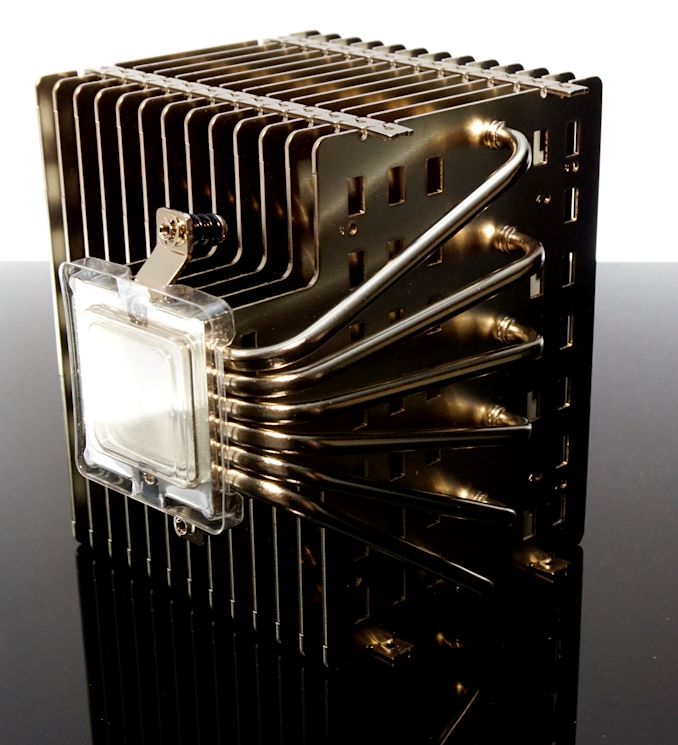 The base of the NH-P1 is almost typical for any modern heatpipe-based cooler, with the exception that six of the fins extend and are directly attached to the base itself. This is mostly to increase the mechanical strength of the NH-P1, as the colossal fin array could not be reliably supported by the heatpipes alone. Yet it may also be playing a little part in the thermal performance of the cooler as well by allowing a little bit of thermal energy to transfer directly from the base towards the fins. 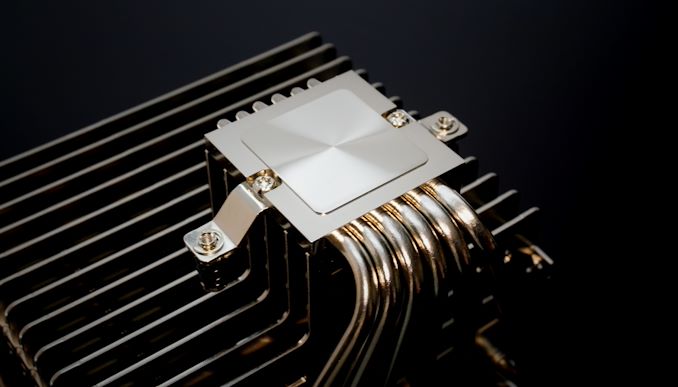 The bottom half of the base is made out of nickel-plated copper, maximizing the heat transfer rate from the CPU to the heatpipes. It is extremely well machined, perfectly flat, and smooth. The rest of the base serves only as a mechanical support and is mostly made out of aluminum, with the exception of the mounting bracket that is nickel-plated steel.