We are excited to announce the release of Ember Data 2.0, the second stable release since 1.13 that includes significant improvements, cleanup, and cruft removal.

As previously discussed, Ember Data releases occur in lockstep with Ember, to help developers better reason about compatibility between these libraries. Ember Data 2.0 is designed to be used in tandem with Ember 2.0, and like Ember 2.0, we have used the occasion of a new major version number to remove deprecated features and clean up the code.

Ember Data 2.0 is about removing deprecated functionality, not adding new features. If you’ve already started using Ember Data 1.13 and cleared the deprecations, you should find upgrading to Ember Data 2.0 to be very straightforward.

In the Ember Data 1.13 blog post, we described how we had overhauled Ember Data’s internals to use the JSON API from top to bottom.

Using JSON API dramatically simplified internal code and APIs, but I want to emphasize that moving to JSON API internally does not affect your applications, and you are in no way required to use JSON API yourself to upgrade to newer versions of Ember Data.

The adapters that determine how your application talks to the backend server remain unchanged, but this change should make the lives of adapter authors much simpler going forward.

There is one significant breaking change in the move from 1.13 to 2.0. The short version of this change is locally deleted (unsaved) records are no longer removed from RecordArrays and hasMany arrays. Ember Data now removes the deleted record only after the delete has been confirmed by the backend. There is also a new addon to make it easier to implement the old behavior.

In Ember Data 1.13, once a record was marked as deleted, it was removed from all of the RecordArrays and hasMany arrays it belonged to. This made it difficult to create UIs where users could “un-delete” records.

For example, imagine you are building a document viewer app using Ember Data. You show the user a list of documents they have access to. When the user deletes a document, you want it to remain in the list, but with a different visual treatment to indicate that it has been deleted locally (ie, not saved back to the server). 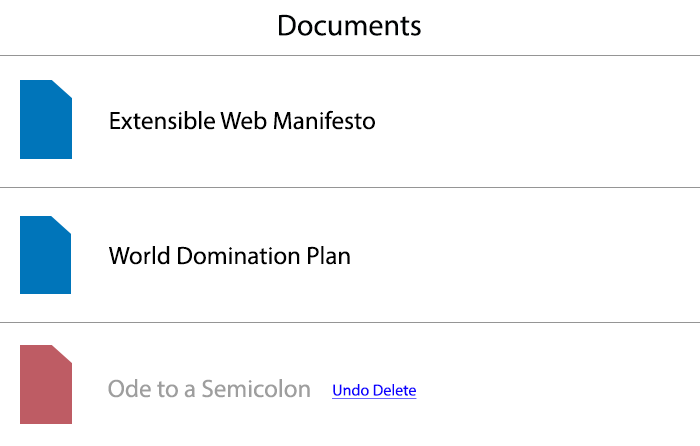 Building this UI was difficult because the record would be removed from the list as soon as you called deleteRecord() on the model.

In Ember Data 2.0, this will be a lot easier because records are no longer removed from haveMany relationships or RecordArrays until the delete has been acknowledged by the adapter. Note that Although deleted records will be visible in many relationships, they will not be serialized when saving these relationships back to the server.

To make the transition easier, the Ember Data team (with help from Clemens Müller) has released an addon called Ember Data Live filterBy. This allows the filterBy method on RecordArrays and hasMany
relationships to return a live filtered subset of the original array. This can be used to filter out deleted but unsaved records to preserve the old behavior, where records are removed from collections as soon as they are deleted. This addon work with Ember Data 1.13 and Ember Data 2.0.

Ember Data data 2.1 will be the first release following Ember’s 6 week release cycle. Rather then rush new features into the beta before they are ready, Ember Data 2.1 will not contain any new features or deprecations. Instead the Ember Data team is going to spend this cycle fixing issues, updating documentation and planning features for future 2.x releases.