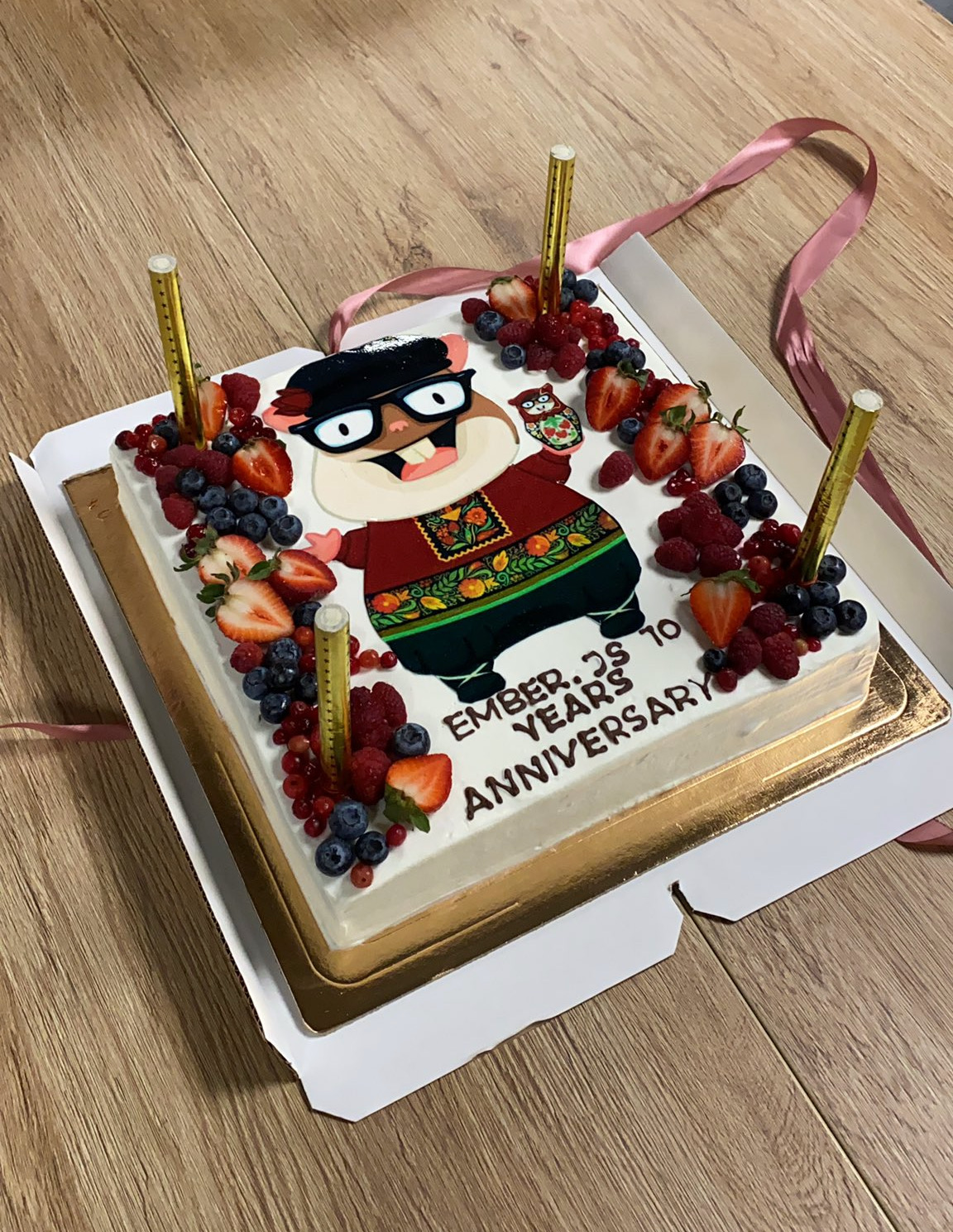 Many thanks to Natasha Fel and Andrey Fel (@andreyfel) for sharing their photos from Ember Nizhny Novgorod’s Meetup, which featured a celebratory Nizhny Novgorod Tomster cake for Ember’s big anniversary! Check out more photos from the meetup here.

Prettier can now officially format HTML templates with Handlebars (HBS) in the newly released version 2.3.0. Thank you to Cyrille David (@dcyriller) for pushing this initiative, which started in 2017, through the finish line.

Prettier is an opinionated code formatter. It enforces a consistent style by parsing your code and reprinting it with its own rules that take the maximum line length into account, wrapping code when necessary. This removes all bikeshedding on what rules we should or shouldn’t have and instead provides one standard for everyone to use by default.

In order to keep your project aligned with Prettier’s formatting we can use the Ember Template Lint plugin: ember-template-lint-plugin-prettier. This plugin defines a single rule that rule will compare your code with Prettier’s output.

So try it out today by using the glimmer parser for Prettier!

If you have been part of the Ember community for a while now and have read The Ember Times’ last issue, you have probably heard about Embroider. This project is currently at version 0.41.0 and usable in Ember projects.

Ben Demboski (@bendemboski) wrote this blog about how he implemented Embroider in a commercial, ember-electron app.

Ben’s blog post explains in detail the app and the process used to make the app use Embroider. All the hard things he ran into, such as ES6 module compliance and third-party add-ons. Luckily, after 3.5 weeks, Ben achieved tree-shaking and code splitting across routes. So if you want to start taking advantage of what Embroider has to offer, this post is a great place to start.

If you read the blog, start with this project yourself and look for a place to get more help, check out the #dev-embroider channel on Ember.JS Discord.

Melanie Sumner (@MelSumner) authored a blog post in conjunction with this week’s Global Accessibility Awareness Day (GAAD) to announce that Ember has taken the GAAD pledge to make accessibility a core value of our framework.

Be sure to read the post to learn more about what Ember has done so far in her efforts for “accessibility by default”, what accessibilty-related work is in the pipeline, and how you can get involved if you’re interesting in contributing to Ember a11y efforts!

Are you looking for a friendly, step by step guide to adding authentication to your Ember app? Look no further than the Ember Simple Auth Quickstart video published by Simplabs. This video provides helpful introduction to this popular authentication / authorization Ember addon. Marco Otte-Witte (@marcoow) explains this tricky part of app development using the latest Ember Octane syntax.

Check out Fleetbase on ProductHunt!

The Ember addon ecosystem is always expanding and we love to keep you up to date with all of them. So here is a summarized list of the latest addons made by the community for the community.

Keep on top of what’s been going on in Emberland this week by subscribing to our email newsletter! You can also find our posts on the Ember blog. See you in two weeks!