Despite the strides we’ve seen from Apple Maps and even Bing Maps, there’s no denying that Google Maps remains the best mapping platform on the planet. If anything, Google Maps remain so far ahead of the competition that Apple Maps and Bing, even years later, are still trying to play catch-up. Say what you will about Android or any of Google’s innumerable endeavors, but the company has search and mapping on lock. And seeing as Google Maps is brimming with somewhat hidden features, we’ve compiled a list of awesome Google Maps tips you may not be aware of.

As a quick aside, one of the many reasons why Google Maps reigns supreme is because Google, to its credit, has not rested on its laurels. Rather than coasting on its past success, Google Maps has improved tremendously over time. With each passing year, Google Maps adds more and more features that ultimately enhance and improve the user experience.

If you need access to Google Maps but anticipate being in a location with poor connectivity, downloading Google Maps for offline use is key. If you’re about to embark on a road trip, or even if you’re running low on battery, this little Google Maps tip is a life-saver.

Once the map is downloaded to your device, you can use it anytime you want no matter what your network connection is. Also, note that you can download multiple mapping areas to your iPhone or Android.

How to zoom in and out with just one finger

This is an all-time great Google Maps tip that a lot of people don’t know about. We covered it a few weeks ago but it’s worth highlighting again. In effect, there’s a way to zoom in and out of a Google Maps area with just one finger. All you have to do is double-tap on the display to zoom in and keep your finger on the screen. Now, simply move your finger down and the mapping area will zoom in for you. This is a clever and useful feature if you’re in a situation where you can only use one hand.

This is one of my favorite Google Maps tricks. If you want to quickly measure the distance between two locations, all you have to do is open up the app and drop a pin at any location. Following that, you should now see a setting with the label “Measure distance.” If you tap that, you can select another location by moving the cursor around the screen. The distance between the two locations will update automatically.

How to change your vehicle icon

This may not be the most useful Google Maps tip, but it’s a fun one. There’s actually a way to change the vehicle icon used in Google Maps. All you have to do is tap on the blue triangle that typically represents your car. When doing so, you should see a few other vehicle icons appear.

The alternative icons aren’t what anyone would deem as artsy or inspired, but it’s still a fun way to personalize the app ever so slightly.

This is a Google Maps tip that I use myself quite often. While Google Maps is great at telling you how to get to your destination via public transit, sometimes you want more planning options. 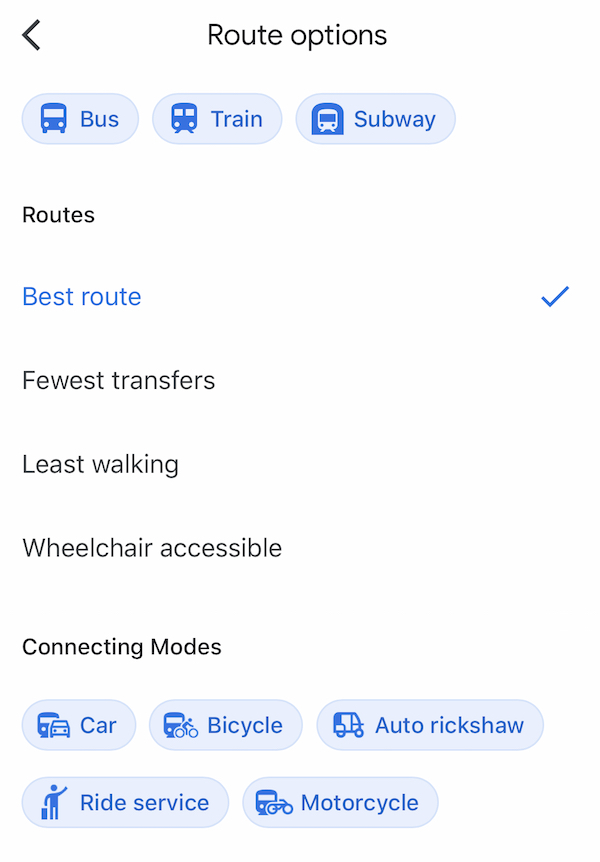 If you’re strolling around looking for a place to eat, parsing through all available restaurants can be a daunting task. Not to worry, there’s a way to customize Google Maps such that you’ll see more recommendations of restaurants you like and less of what you don’t.

To take advantage of this Google Maps tip, tap your profile icon in the upper-right-hand portion of the screen. Next, select Settings. Following that, go to “Manage your preferences” which is listed below the Exploring Places heading.

Once there, you can set up any number of filters. For instance, you can let Google know if you have any dietary restrictions. The options under this heading include alcohol-free, gluten-free, halal, kosher, vegan, and vegetarian.

Set a reminder so you leave right on time

We’ve all been there. You think you’re being responsible. You map out your journey ahead of time and know exactly what time you need to leave. But then life happens and you forget to leave on time and end up showing up late to your destination.

To prevent this, this Google Maps tip will help you leave exactly on time thanks to a friendly reminder. Once you type in your destination to Google Maps, tap the three horizontal dots on the upper right. When doing so, you’ll see an option that reads “Set a reminder to leave.”

From there, simply select what time you want a reminder and you’re good to go.