Available now on Google’s Pixel phones as a “feature drop,” Android 12L will soon land on tablets and foldable devices from companies such as Samsung Electronics Ltd., Lenovo Group and Microsoft Corp. too.

The biggest updates will only be visible on larger screens – tablets and foldable phones – and the most prominent has to be the addition of a new taskbar with up to six applications. The idea is it can be used to switch quickly among apps when multitasking, and to provide an easier way to initiate split-screen mode.

“You can also drag-and-drop any app from the taskbar to enter split-screen mode so you can do two things at once,” said Android Vice President of Engineering Andrei Popescu in a blog post. “You can watch a YouTube video while you scan the news, or search for accommodations for an upcoming trip in a Chrome browser while you view its location in Google Maps.”

Other updates include a grid view for the Recents screen, as well as a two-column layout on the lockscreen and notifications view. That’s designed to give users more space to view and swipe away notifications, Popescu explained.

The Settings app also gets the two-column treatment. When it comes time to set up a new device or make changes to an existing one, users will be able to see more information at a glance, Popescu said. It will also make it possible to alter settings without having to go in and out of each sub-menu.

“Let’s say you’re looking to change the wallpaper on your device – select” Wallpaper & style “from the navigation panel and make your pick on the side, all in one view,” Popescu wrote. 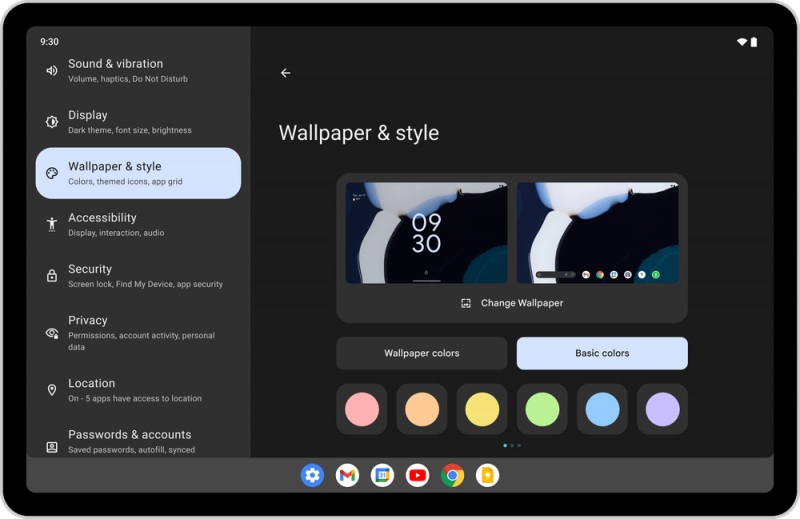 What is strange is that the Pixel phone is also receiving the update. Because it has a smaller screen, it won’t see any of the above features. But there are some usability improvements and a handful of new animations, such as a pulsing graphic that shows when using the fingerprint sensor to unlock the phone or an app.

On the home screen, users will be able to long press on the display to reveal a new, quick wallpaper picker that shows the current and previous four backgrounds. Tap on one and the wallpaper will be immediately updated with a flashy animation. The update also makes it possible to tap the day / date to open the Google Calendar app, which was not possible before.

Popescu said Samsung, Lenovo and Microsoft will all release Android 12L updates for their Android tablets and foldables “starting later this year.”