Apple Inc. announced a new upgrade to its M1 family of chips with the powerful M1 Ultra during its “Peek Performance” virtual event today that will power the all-new Mac Studio professional-level compact desktop computer.

Alongside the new silicon chip, Apple also unveiled a new iPhone SE, which uses the A15 Bionic chip, and a new version of the iPad Air, now with the M1 chip.

The M1 Ultra represents a huge upgrade for the M1 architecture, featuring UltraFusion, a bridge that fuses two M1 Max chips together so that they can be treated as one chip on a motherboard in order to deliver unprecedented levels of performance.

According to the company, the new chip is made up of 114 billion transistors, which is the most ever in a personal computer chip. It has a 20-core central processing unit, a 64-core graphics processing unit and a 32-core Neural Engine, which makes it stand out as the most powerful chip that Apple has introduced to date.

When approaching the need to build a more powerful chip, Apple said, the most common way to double processor power would be to place two chips on a motherboard and bridge them. However, that causes issues such as latency and forces developers to program their apps anew to handle the new architecture. With Apple’s UltraFusion design, however, the two chips are capable of processing more than 2.5 terabytes per second at low latency and the two M1 Max chips look like one chip. Developers need not rewrite anything.

“The performance of the new M1 Ultra chip is remarkable,” Ben Wood, chief analyst at CCS Insight, told SiliconANGLE. “It is a reminder of Apple’s prowess in semiconductor design and Apple Silicon’s pivotal role in the ‘finished product’ advancements it enables.”

Apple also upgraded the unified memory architecture with the M1 Ultra. Memory bandwidth is now 800 gigabytes per second, which the company says is more than 10 times faster than the latest PC desktop chip. The M1 Ultra can also be configured to use 128GB of unified memory, compared with most graphics cards that max out at 48GB of memory.

With the 32-core Neural Engine, the M1 Ultra can run up to 22 trillion operations per second. That will make it a powerhouse for machine learning apps.

The move to Arm’s architecture with the M1 is not new, but the speed of the transition has been startling. “The products it’s enabling are a reminder of Apple’s end-to-end control and competitive advantage,” Wood said. “Apple is redefining expectations in computing with M1 and today’s event is a sign of what will enable in the coming years in terms of performance, battery life and new form factors.”

The Mac Studio and Studio Display is a pairing of a new Mac desktop and monitor designed for professionals looking to get as much power and performance as they can from their system. It does this by building on the M1 Max and the newly announced M1 Ultra.

“Mac Studio ushers in a new era for the desktop with unbelievable performance powered by M1 Max and M1 Ultra, an array of connectivity, and a compact design that puts everything users need within easy reach,” said Greg Joswiak, Apple’s senior vice president of worldwide marketing.

By putting the power of an M1 Ultra chip under the hood, the Mac Studio can be a very small form factor. That means it’s only a 7.7-inch square with a height of 3.7 inches, so it can fit beneath most displays or easily on any desktop without taking up much space.

The small design also allows it to have a unique thermal profile with a fan setup that pulls in air from underneath the chassis, blows it across the M1 chip, guides it through the other components and sends it out the back as quietly as possible. According to Apple, it’s designed to remain very quiet even under heavy workloads, making it a good companion for creative work.

Even with its compact design, the Mac Studio is designed to provide a lot of connectivity. In the back, there are four Thunderbolt 4 ports to connect displays and other high-performance devices. It also supports a 10-gigabit-per-second Ethernet port, two USB-A ports, an HDMI port and an audio jack for high impedance headphones or amplified speakers. The desktop has Wi-Fi 6 and Bluetooth 5.0 built into the motherboard as well.

Additionally, the front has two USB-C ports and an SD card slot to allow users to import photos and video more easily. On the M1 Ultra version of the product, the USB-C ports Thunderbolt 4 as well.

Studio Display is a 27-inch 5K Retina screen with its own camera and sound system integrated designed to supplement the Mac Studio desktop. It has an all-aluminum enclosure with a slim profile and narrow edge margins. Its built-in stand allows for up to 30 degrees of tilt and comes with a tilt- and height-adjustable stand option with a counterbalancing arm that can be added to make it more adjustable.

The screen features 600 nits of brightness with over 14.7 million pixels. Technology built into the screen uses True Tone to adjust the display’s color temperature automatically for environmental changes for a more natural viewing experience. Apple also added an anti-glare coating using a nano-texture glass option for studios with bright lights.

The A13 Bionic chip is built into the screen and drives its advanced camera and audio system. This includes a 12MP Ultra Wide camera and Center Stage, which is coming to Mac for the first time, which is capable of keeping everyone centered in the frame at all times during video calls. For audio, it uses a three-microphone audio array and a high-fidelity six-speaker sound system.

For connectivity, the display features three USB-C ports and a Thunderbolt port that can deliver up to 96 watts of power to charge a Mac notebook.

“Those who don’t understand the high-end Mac franchise will doubtless be outraged by the $ 6,000 price tag for an entry-level Mac Studio M1 Ultra and Studio Display, but the reality is that the pricing is more than affordable for post-production houses in the film and music industries, ”Wood said. “It’s a rounding error compared to the price of a high-end production grade camera.” 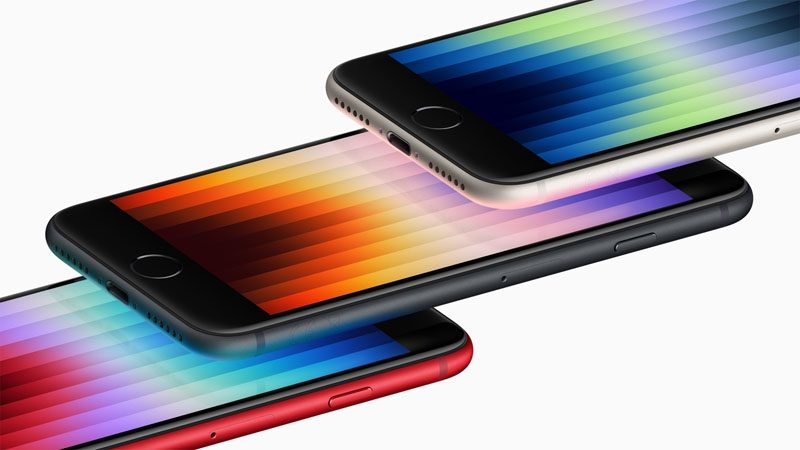 As expected, Apple announced a new iPhone SE, a powerful but affordable iPhone with the A15 Bionic chip, the same as the iPhone 13.

“IPhone SE has been an incredibly popular choice with our existing users and for new iPhone customers, thanks to its iconic design, exceptional performance and affordable price,” said Kaiann Drance, Apple’s vice president of worldwide iPhone product marketing. “This year we’ve built the most powerful and durable iPhone SE yet.”

The new SE features a 4.7-inch display made out of aerospace-grade aluminum and glass. It has rounded, beveled corners and a Home Button and Touch ID at the bottom for easy access to apps, allowing fingerprint biometrics to be used in lieu of passwords for App Store purchases, Apple Pay transactions and more.

The phone also now has 5G and Smart Data mode, allowing the phone to shift seamlessly between LTE and 5G speeds in order to conserve battery life.

With the addition of the A15 Bionic chip, the phone now has access to advanced camera features, which complement the accompanying 12-megapixel Wide camera. The benefits include Smart HDR 4, a technology that can segment out photographs and videos to provide better adjustments for color and resolution against differing backgrounds first introduced in the iPhone 13.

The iPhone SE will be available with 64GB, 128GB and 256GB models and starts at $ 429. Pre-orders of the new phone start on Friday and it starts shipping on March 18.

“Apple’s decision to use its A15 Bionic chipset in the iPhone SE contrasts the approach taken by rival smartphone makers who tend to use less powerful chipsets in cheaper devices,” Wood said. “However, at $ 429, the iPhone SE is a long way from the sub $ 200 5G Android smartphones currently offered by several Chinese manufacturers. Apple’s entry-level iPhone would be considered a flagship product by many rival manufacturers. “

The newest evolution of the iPad Air adds the M1 chip into its hardware to boost its performance above its predecessors, adds an Ultra Wide front camera and 5G capability.

The M1 chip was unveiled by Apple in 2020 and optimized for Mac systems as a system-on-chip that was added to the Mac and MacBook lineup. It was quickly incorporated into iPads over the next year as well and now the iPad Air has joined that family as well.

With the M1 on board, the new iPad Air delivers twice the performance as the previous generation. This means that users can easily use it for editing multiple streams of 4K video, play graphics-intensive video games, design and edit in 3D and play augmented reality games.

For connectivity, the iPad Air now has 5G capability that can reach peak speeds of up to 3.5GBPS in ideal conditions. It also has Wi-Fi 6 support for wireless networking around the home. For wired connections, the USB-C port is now two times faster than the previous generation and capable of up to 10GBPS.

The new iPad Air starts at $ 599 for the Wi-Fi model and $ 749 for the 5G model. Both can be pre-ordered starting Friday and it starts shipping on March 18.