The biggest gain was made by Broadcom, which saw its stock rise 4% after posting net income for the first quarter of $ 2.47 billion, reversing a slight dip in regular trading. The company’s earnings before certain costs such as stock compensation came to $ 8.39 per share, with revenue rising 16% to $ 7.71 billion.

The chipmaking business is clearly still a very profitable one, as Wall Street was expecting lower earnings of $ 8.13 per share on revenue of $ 7.61 billion.

No doubt Broadcom is also helped by the fact that it has fingers in many pies. Although its main business involves making wireless chips for smartphones, its silicon is also used in broadband communications, networking, storage and industrial applications. In addition, it has a rising infrastructure software business for mainframes, data centers and cybersecurity.

Hence, Broadcom operates two main business segments. The biggest, semiconductor solutions, accounted for just over three-quarters of its revenue with sales of $ 5.87 billion in the quarter, up 20% from a year ago. Infrastructure software did $ 1.83 billion in sales, up 5%.

Holger Mueller of Constellation Research Inc. said Broadcom delivered another good quarter, although its growth was only marginally better than expected. “However, Broadcom did an excellent job at cost management as it turned over a significantly higher profit in the quarter compared to the year before,” the analyst said.

Looking to the next quarter, Broadcom said it expects revenue of about $ 7.9 billion, well ahead of Wall Street’s consensus estimate of $ 7.42 billion in sales. “Our second-quarter outlook projects year-over-year growth to accelerate,” added Tan. 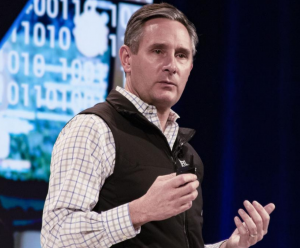 Marvell delivered a similarly reassuring performance, reporting fourth-quarter income of $ 6.1 million, with its earnings before certain costs coming to 50 cents per share. Revenue for the period jumped 68% to $ 1.34 billion.

That was better than expected too, with analysts looking for earnings of 48 cents per share on sales of $ 1.32 billion. Marvell’s stock ticked up just over 2% in the after-hours trading session, having slipped by more than 3% during a day in which the tech-heavy Nasdaq fell 1.6%.

Marvell designs a variety of data storage and networking chips that are primarily sold to cloud computing providers and companies in the automotive and communications industries. It’s a much smaller player in the business than Broadcom, but it has a strong presence and is growing fast in the primary segments in which it operates.

“Revenue grew in all five of our end markets in the fourth quarter, with strong contributions from the cloud, 5G and auto, which together represented 40% of total revenue,” he said. “In addition, our enterprise networking end market has become another growth pillar, with revenue increasing 64% year-over-year, driven by our content gains and share increases, as enterprises continue to transform their infrastructure to address the needs of a more flexible , hybrid workforce. ”

The star performer was in fact Marvell’s data center business, which delivered $ 574 million in revenue, up 113% from a year ago. Carrier infrastructure generated $ 241 million, up 45%, while enterprise networking sales came to $ 263 million. Marvell’s consumer businesses added $ 185 million in sales, up 11%, while the smallest automotive segment was also the fastest-growing, with sales up 139%, to $ 79 million.

Mueller said the COVID-19 pandemic economy has been treating Marvell very well compared to other semiconductor firms, helping it to achieve record revenue in fiscal 2022.

“It’s great to see Marvell adding design wins across its product categories,” Mueller said. “Even so, with its record revenue growth Marvell still wasn’t able to generate a profit for the full year. The bright spot seems to be that the last quarter ended with a small profit, suggesting the company may have finally found the right cost structure for its operations. Investors will be keen to see if that’s the case, and future quarters will tell. “