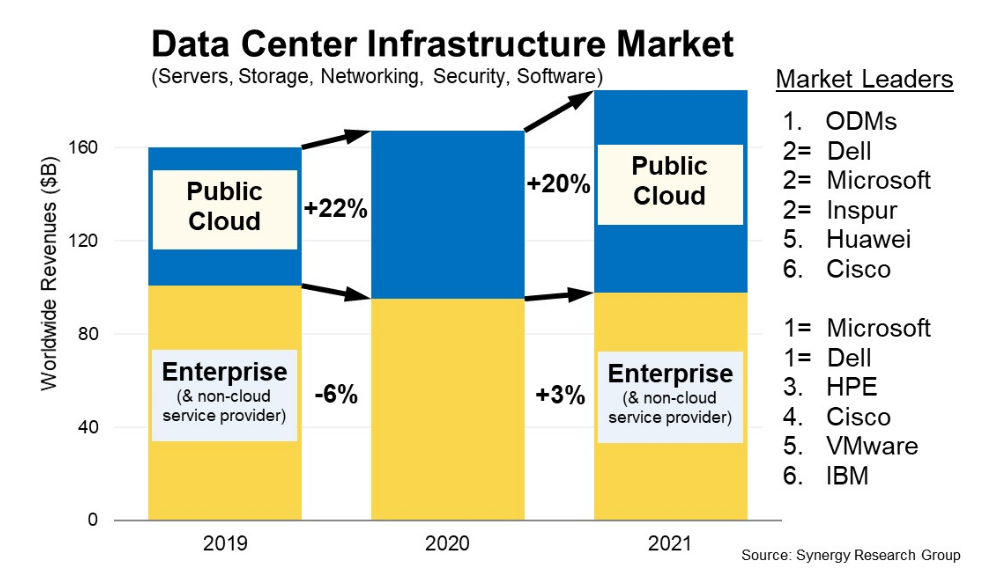 Over the last 12 months, they have spent billions of dollars to kit out new data centers with servers, storage, networking and software. Indeed, the cloud infrastructure providers now account for almost half of all data center spending in the world, according to a report released today by Synergy Research Group.

The $ 185 billion number is an all-time high, Synergy added, amounting to a 10% rise in spending from the year before. Cloud infrastructure spending rose 20%.

The likes of AWS, Microsoft Azure and Google Cloud are all investing heavily in servers and other gear to cater to the growing demand for the cloud computing services they offer.

Synergy Chief Analyst John Dinsdale said he expects this trend will continue over the next five years, with cloud providers increasing their data center spending by double digits while enterprise spending is expected to stay flat.

“In the server segment of the market, unit shipments to public cloud providers have now far surpassed enterprise volumes, although the difference in value of the two market verticals is much less pronounced due to higher enterprise server ASPs,” Dinsdale explained. “That gap in value will grow as public cloud server volumes continue to surge.”

That’s great news for companies such as Dell, Microsoft and Inspur Corp., which were the market leaders in terms of sales of hardware and software to cloud vendors. The companies all had roughly the same market share, Synergy said.

However, the bulk of data center sales to public cloud providers came from original design manufacturers, which when lumped together accounted for the largest market share. Some of the top ODMs include companies such as Quanta Computer Inc., Wiwynn Corp., Inventec Corp. and Hon Hai Precision Industry Co. Ltd., which is better known as Foxconn. All four are based in Taiwan.