Nutanix reported a net loss for the second quarter of $ 5.1 million, with a loss before certain costs such as stock compensation of 3 cents per share. Revenue for the period came to $ 413 million.

That was better than expected, since Wall Street modeled a wider loss of 17 cents per share on $ 407 million in sales.

Nutanix also reported annual contract value or ACV billings of $ 217.9 million, up 37%. ACV is a key metric that measures how much the company invoiced its clients for in the quarter.

“We had a solid quarter, we outperformed all our guidance metrics,” Nutanix Chief Executive Rajiv Ramaswami (pictured) told SiliconANGLE in an interview. “We’re well on our target to be cash flow positive this year.”

Nutanix sells a software-defined hyperconverged infrastructure or HCI stack that integrates compute, storage and networking components into a single appliance or cloud service. Cloud is a big area of ​​focus for the company. In recent months, Nutanix has worked to simplify its product portfolio, shifting to becoming a “hybrid multicloud company” in order to deliver more consistency for its customers, Ramaswami said.

He explained that there are several unique aspects to Nutanix’s multicloud approach, including its expertise in managing customer’s data and its simplicity.

“Our history is bringing simplicity to complex enterprise software,” the CEO explained. “We did that with HCI and now we’re doing that with the clouds. We don’t need elaborate IT teams to run our product. ”

Nutanix also provides customers with plenty of flexibility and freedom of choice at every level in the stack, with one license that covers every deployment. Lastly, Nutanix has a strong net promoter score, a customer loyalty and satisfaction measurement taken from asking customers how likely they are to recommend a company, product or service. According to Ramaswami, Nutanix’s NPR is better than 90% of others in the infrastructure market.

Ramaswami said Nutanix’s multicloud approach resonates with major public cloud infrastructure providers such as Amazon Web Services Inc. and Microsoft Corp. just as much as it does with its customers.

“For the big cloud providers, they’re perfectly happy landing customers through our platform,” he said. And as far as customers are concerned, he said, “for those that want to go to the cloud, we provide an easy way to do that. For new customers that want hybrid multicloud, we are a platform that can take them to the cloud whenever they want to. ”

Looking to the next quarter, Nutanix offered a revenue forecast of $ 395 million to $ 400 million, just below Wall Street’s consensus of $ 401 million. The full-year forecast is a little better, though, with Nutanix saying it expects revenue of $ 1.625 billion to $ 1.63 billion, versus the $ 1.626 billion estimate.

“The company had double-digit customer growth for the quarter,” McDowell continued. “So I’m not concerned about her guidance. Nutanix’s fortunes to some degree follow the overall server market, and that is expected to be soft over the coming quarter or so because of supply chain issues. There’s no problem with Nutanix’s fundamentals. “ 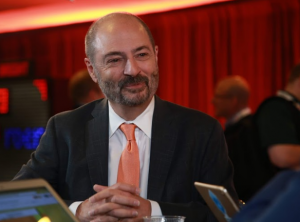 Nutanix’s strong earnings were overshadowed by Pure Storage, which published results that beat estimates from some distance.

For the fourth quarter, Pure Storage reported earnings of 36 cents per share on revenue of $ 708.6 million, well ahead of Wall Street’s forecast of a 26-cent-per-share profit on sales of $ 629.3 million. The company’s revenue jumped 41% from a year ago, its strongest growth in eight quarters. That helped it deliver a net profit of $ 14.9 million in the quarter.

“By every measure, Pure had an outstanding quarter and fiscal year,” Pure Storage Chairman and CEO Charles Giancarlo (pictured, above) said in a statement. “As evidenced by 41% growth in Q4, our strategy to deliver an innovative portfolio of data storage and services, with industry-leading customer experiences and flexible, efficient operations continues to position Pure as the trusted provider for all organizations.”

Pure also revealed that it passed the 10,000 paying customer mark in the quarter. Meanwhile, its subscription services revenue rose 42% to $ 216 million. For the full fiscal 2022 year, Pure reported revenue of $ 2.18 billion, up 29% from a year ago.

McDowell told SiliconANGLE that he was absolutely stunned by Pure’s results. “Pure usually outperforms its competitors in terms of growth, but NetApp, Dell and HPE had everyone’s expectations set really low, so this number was a real surprise,” he said.

The analyst said Pure’s strong performance was partly driven by growth in its midrange storage arrays, which is the company’s sweet spot. However, the real secret to its success may well have been its supply chain management. McDowell said he believes Pure benefited from some spillover from orders that competitors such as Dell Technologies Inc. and NetApp Inc. were unable to fulfill because of supply issues.

“Charlie was really the first CEO in the storage sector I heard talk about managing the supply chain as the pandemic began,” McDowell explained. “The Pure team is clearly executing well there, as they don’t seem to be having the same shortages that the rest of the market is suffering. I’d love to know the secret. “

During the quarter, Pure announced it was teaming up with AWS to make a key, three-year investment focused on helping joint customers use its Portworx container storage platform to manage applications running on Amazon EKS. As part of the investment, the companies plan to launch “solution development and enablement programs.” Pure also announced a new data protection tool for AWS customers in early access.

McDowell told SiliconANGLE at the time that FlashArray // XL is a big deal, as it will allow Pure to operate in the highest tier of the storage market, where only Dell Technologies Inc. and a handful of small providers participate. Before that, Pure had always been locked out of deals requiring an array with so much horsepower and capacity.

What with its strong results, closer ties with AWS and its powerful new array, Pure Storage enters fiscal 2023 with lots of confidence. For the first quarter, it expects revenue of $ 520 million, well ahead of Wall Street’s forecast of $ 512 million. For the full year, it said it sees total revenue of $ 2.6 billion, representing growth of almost 20%, versus Wall Street’s forecast of $ 2.1 billion.

With reporting from Paul Gillin