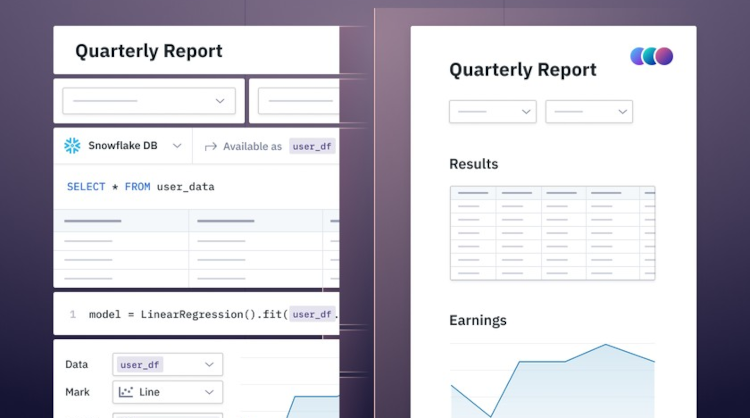 Hex Technologies Inc., the developer of a data science platform of the same name, today announced that it has closed a new $ 52 million funding round.

The Series B round included contributions from Snowflake Inc. and Databricks Inc., two of the most prominent players in the data management market. Andreessen Horowitz was the lead investor, while returning backers Redpoint and Amplify Partners contributed as well.

Hex’s data science platform enables workers to analyze their company’s business information for useful patterns. The platform can be used to answer business questions, such as what factors led to a sales jump in a retailer’s most recent fiscal quarter. Hex also helps users monitor trends, for example how product demand changes from one week to the next.

Data scientists rely on SQL to extract the business information they wish to analyze from the database where that information is stored. SQL queries are also used to turn business records into a form that is easier to process.

Python and R, the other two languages ​​supported by Hex, have a different role in analytics projects. They’re used to write the code that turns data into business insights.

Hex’s support for multiple languages ​​allows data scientists to retrieve the information they wish to process using SQL, then analyze it with Python or R, in a single interface. They can then use the same interface to turn data into graphs. Extracting, processing and visualizing data are tasks usually carried out with different tools, which means that consolidating the workflow in a single platform can potentially improve data science teams’ productivity.

Hex also provides no-code features for business users without extensive data science expertise. The startup’s platform includes pre-packaged interface elements that can be assembled into a web application. A Hex-powered web application might, for example, feature a collection of graphs that track how sales in a retailer’s stores change over time and monitor related metrics such as customer retention.

“The beauty of Hex is in how we combine the technical and analytical, bringing code alongside powerful UI-based tools,” stated Hex co-founder and Chief Technology Officer Caitlin Colgrove. “Hex gives more people access to these workflows so they can interact and drive impact with their data.”

Hex says that its platform is used by thousands of data scientists. The startup’s revenue and customer count reportedly both increased by a factor of four since its last funding round, a $ 16 million Series A announced last October.

Hex will use its latest $ 52 million funding round to double its headcount by this year’s end. Additionally, Hex co-founder and Chief Executive Officer Barry McCardel wrote in a blog post today that the startup will invest some of the new funding in speeding up product development efforts. Hex has already been rolling out new features at a rapid pace: this month alone, the startup introduced support for the R programming language and an integration with Databricks’ data platform.

Hex is the second startup in as many months to have raised a funding round that included the participation of both Databricks and Snowflake. Last month, the two rivals backed a $ 222 million funding round for dbt Labs Inc., the creator of a popular data transformation platform. The startup’s platform helps companies remove errors from their data and organize it in a format that makes finding business insights easier.