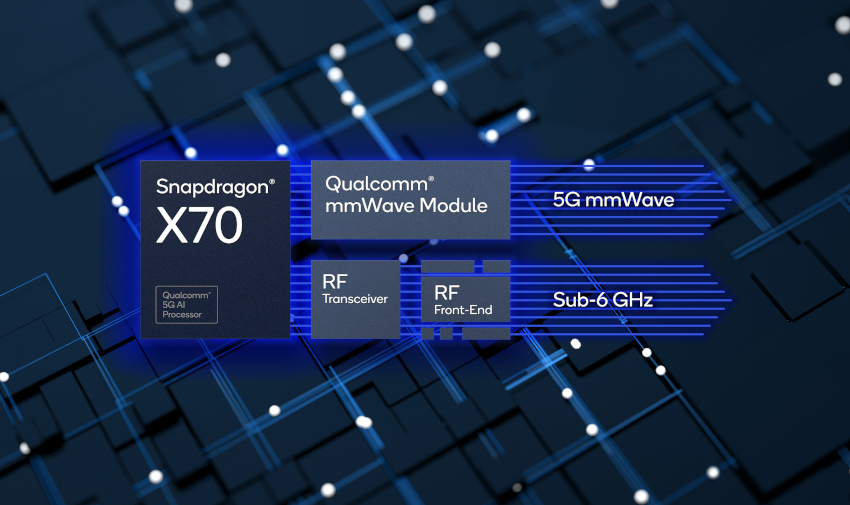 Qualcomm Inc. today debuted a new chip that mobile devices can use to connect to 5G carrier networks.

A mobile device relies on not one but several different hardware components to establish 5G connections. It uses an array of miniature antennas to send and receive data in the form of radio signals.

When radio signals are received by a device’s antennas, they are prepared for processing by a component known as the RF front end. Meanwhile, the computations involved in sending and receiving data are carried out by a handset’s built-in modem.

Sub-6GHz is a technology that carriers use to provide 5G connectivity when a mobile device is distant from the cell tower to which it’s linked. The technology is faster than LTE, but doesn’t provide as much bandwidth as mmWave, the other version of 5G that Qualcomm’s X70 chip supports. Carriers can use mmWave to provide download speeds of several gigabits per second, but only if the user’s device is within a relatively short distance of the nearest cell tower.

The X70 uses its onboard AI processor to optimize the antennas of the mobile device in which it’s installed. According to Qualcomm, the chip’s antenna optimization features speed up some of the processing tasks involved in wireless networking by up to 30%.

One of the innovations in 5G that makes it faster than LTE is a technology called beamforming. The technology allows a cell tower to calculate the optimal way of beaming data to a user’s device, which speeds up connections and reduces interference for nearby handsets. The X70’s AI processor helps with radio beam management to improve wireless connectivity, Qualcomm said.

“Our 5th generation modem-RF system extends our global 5G leadership and the introduction of native 5G AI processing creates a platform and inflection point for performance-enhancing innovations,” said Durga Malladi, senior vice president and general manager of Qualcomm’s 5G, mobile broadband and infrastructure group. “The Snapdragon X70 is an example of how we’re realizing the full potential of 5G and making an intelligently connected world possible.”

In addition to features for improving connection speed and reliability, Qualcomm has equipped the X70 with power efficiency optimizations. The company is promising an up to 60% improvement in power efficiency compared to earlier mobile networking chips.

Qualcomm will begin sampling the X70 to customers next quarter. The company expects the first X70-powered mobile devices to launch by year’s end.