The precise direction of VMware Inc.’s future is unknown, given the planned Broadcom Inc. acquisition, but one thing is clear: The subject of what Broadcom Chief Executive Hock E. Tan plans will not be the main focus of the agenda at the upcoming VMware Explore event next week in San Francisco. We believe that despite any uncertainty, VMware will lay out for its customers what it sees as its future. And that future is multicloud or cross-cloud services: what we would call supercloud.

In this Breaking Analysis, we drill into the latest Enterprise Technology Research survey data on VMware. We’ll share with you the next iteration of the supercloud definition based on feedback from dozens of contributors. And we’ll give you our take on what to expect at VMware Explore next week. 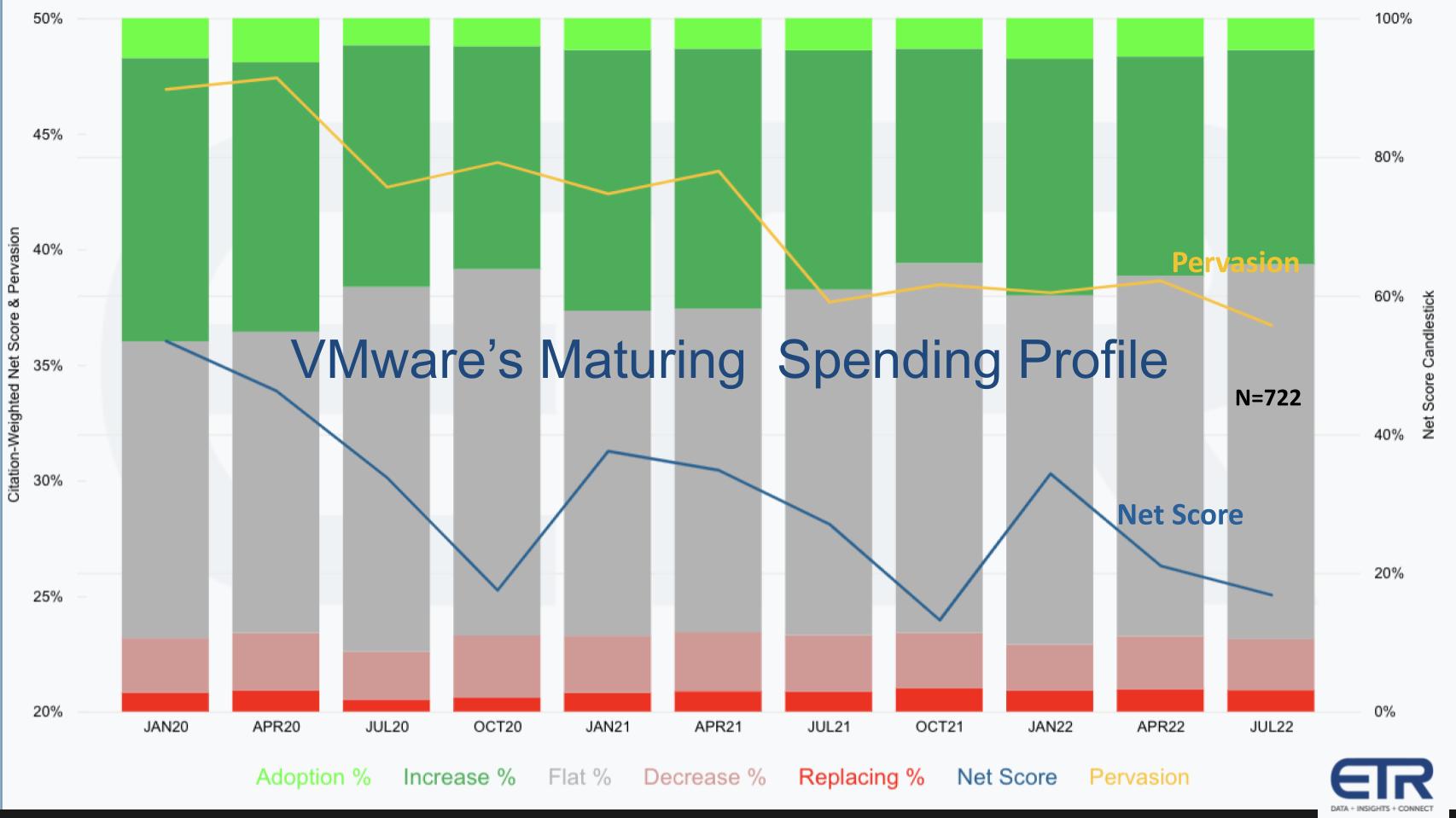 You see it in the earnings numbers. VMware announced a solid quarter this week, beating earnings estimates and growing the top line by 6%. But it’s clear from its financials and the ETR data above that VMware’s halcyon glory days are behind it. This chart shows the spending profile from ETR’s July survey of nearly 1,500 information technology buyers and chief information officers, which included 722 VMware customers.

The green bars show higher spending (new adds and spending up 6% or more) and the red bars show lower spending (down 6% or worse and defections). The gray bars represent customers with flat spending on VMware and it tells the story. A very minor percentage of customers is migrating off  VMware – it’s just too valuable, too high-quality and very sticky. Customers are just not investing as rapidly as in previous years.

The blue line at about the 25% mark on the X axis shows Net Score or spending momentum, derived by subtracting the reds from the greens. The Yellow shows market penetration or Pervasiveness in the survey, representing VMware’s “mention share” within the survey data.

The data tells us spending on VMware is steady but not remarkable. The timing for an acquisition is, quite rightly, now. 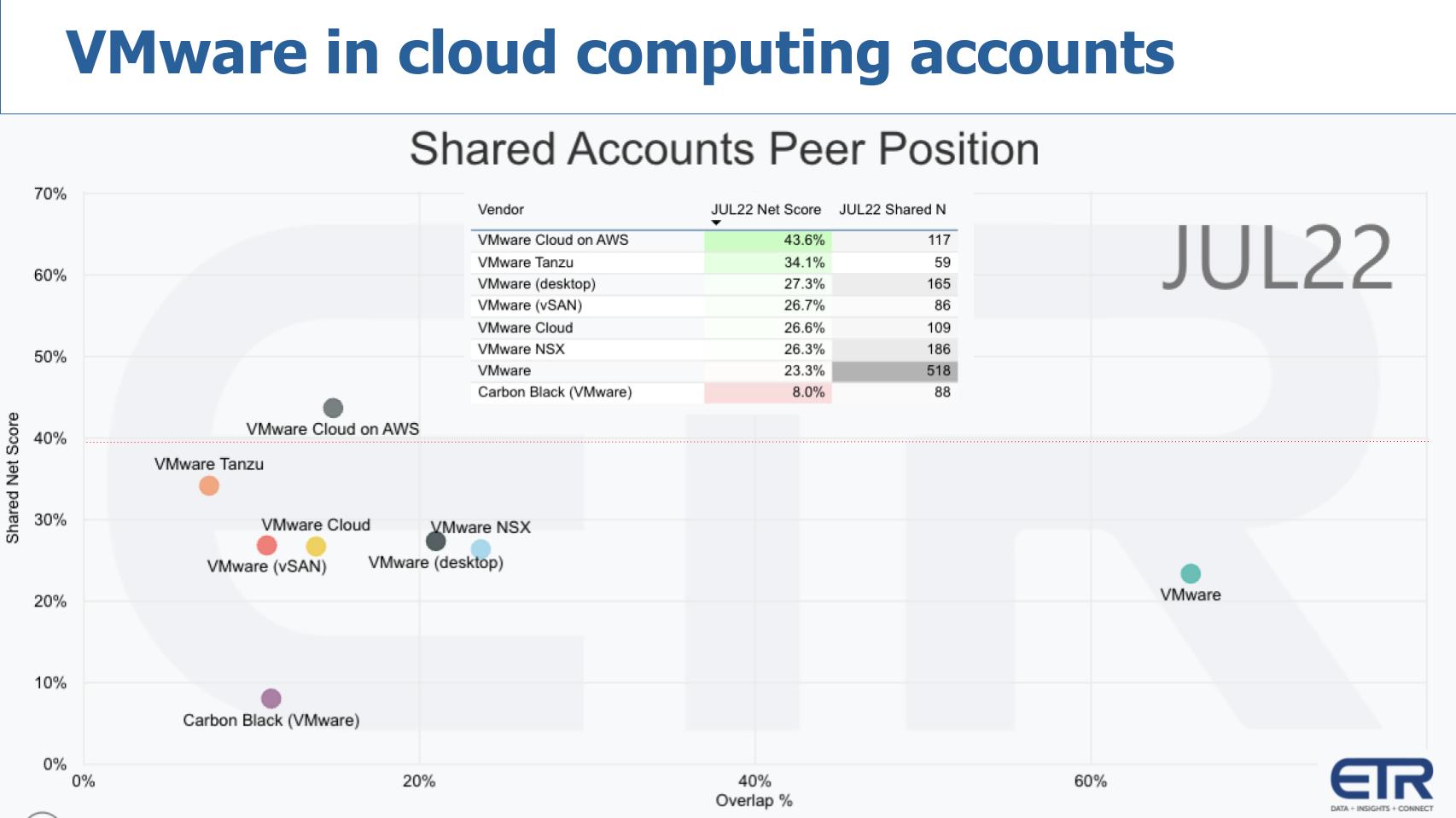 The chart above shows the Net Score and Pervasiveness juxtaposed on an XY graph and breaks down the VMware portfolio on those dimensions. The table insert shows the raw data that determines the position of each plot. The horizontal red line at 40% represents elevated momentum.

You can see the dominance of respondents citing VMware as a platform on the X axis (N=518) and its corresponding spending momentum or Net Score on the Y (23.3%). Only VMware Cloud on AWS (N=117) is above that magic 40% line. Notably, Tanzu has jumped up significantly from previous quarters (smaller N of 59), with the rest of the portfolio showing steady as you would expect from a maturing platform. Only Carbon Black (N=88), the endpoint security acquisition VMware made in 2019, is threatening to enter the red zone. VMware Cloud (including VCF), NSX, vSAN and desktop make up the balance of the portfolio and are again, solid but not remarkable in terms of spending momentum.

What Broadcom will do with each of these is a matter of speculation, but you can bet that the key decision point will be the product’s ability to throw off earnings before interest and taxes and/or its ability to help Broadcom delever and reduce debt.

VMware is poised to be a prominent player in supercloud

We believe that VMware is going to make a significant move in cross-cloud services — what we refer to as supercloud. For months we’ve been refining the concept and definition. At Supercloud22 we had discussions with more than 30 technology and business experts and have gathered input from many more.

Based on that feedback, here’s the definition we’ve landed on. 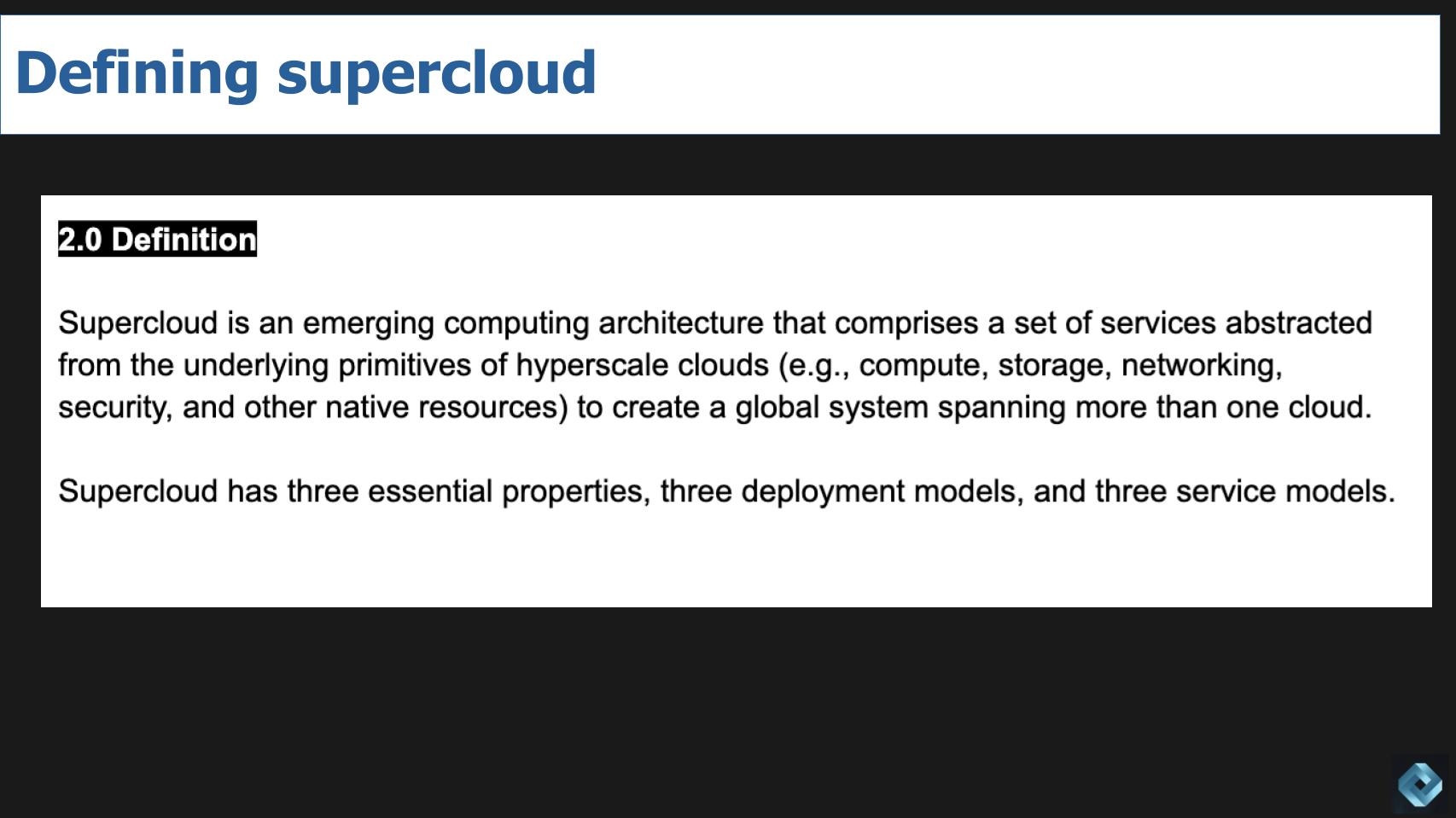 Supercloud is an emerging computing architecture that comprises a set of services abstracted from the underlying primitives of hyperscale clouds (e.g., compute, storage, networking, security, and other native resources) to create a global system spanning more than one cloud.

The essential properties of supercloud

What are the essential elements of supercloud? We’ve simplified the picture from our last report and we show them below. 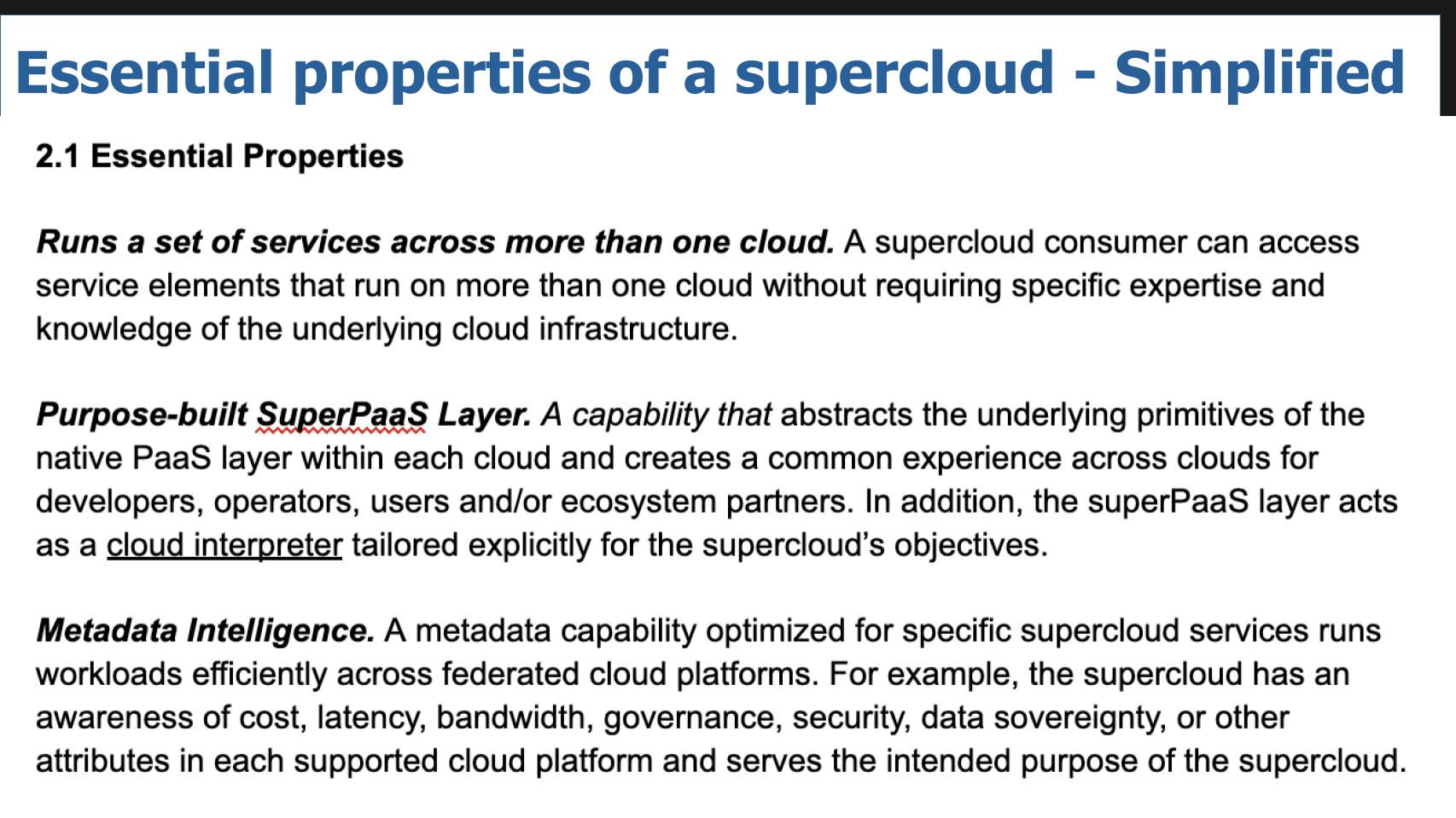 The essential characteristics of a supercloud comprise the following:

Purpose-built superPaaS. A capability that abstracts the underlying primitives of the native platform-as-a-service layer within each cloud and creates a common experience across clouds for developers, operators, users and/or ecosystem partners. In addition, the superPaaS layer acts as a cloud interpreter tailored explicitly for the supercloud’s objectives.

Metadata intelligence. A metadata capability optimized for specific supercloud services runs workloads efficiently across federated cloud platforms. For example, the supercloud has an awareness of cost, latency, bandwidth, governance, security, data sovereignty or other attributes in each supported cloud platform and serves the intended purpose of the supercloud.

Based on feedback from technologists building or contributing tools to build supercloud, analysts and consultants, we’ve identified three deployment models for supercloud, shown below. 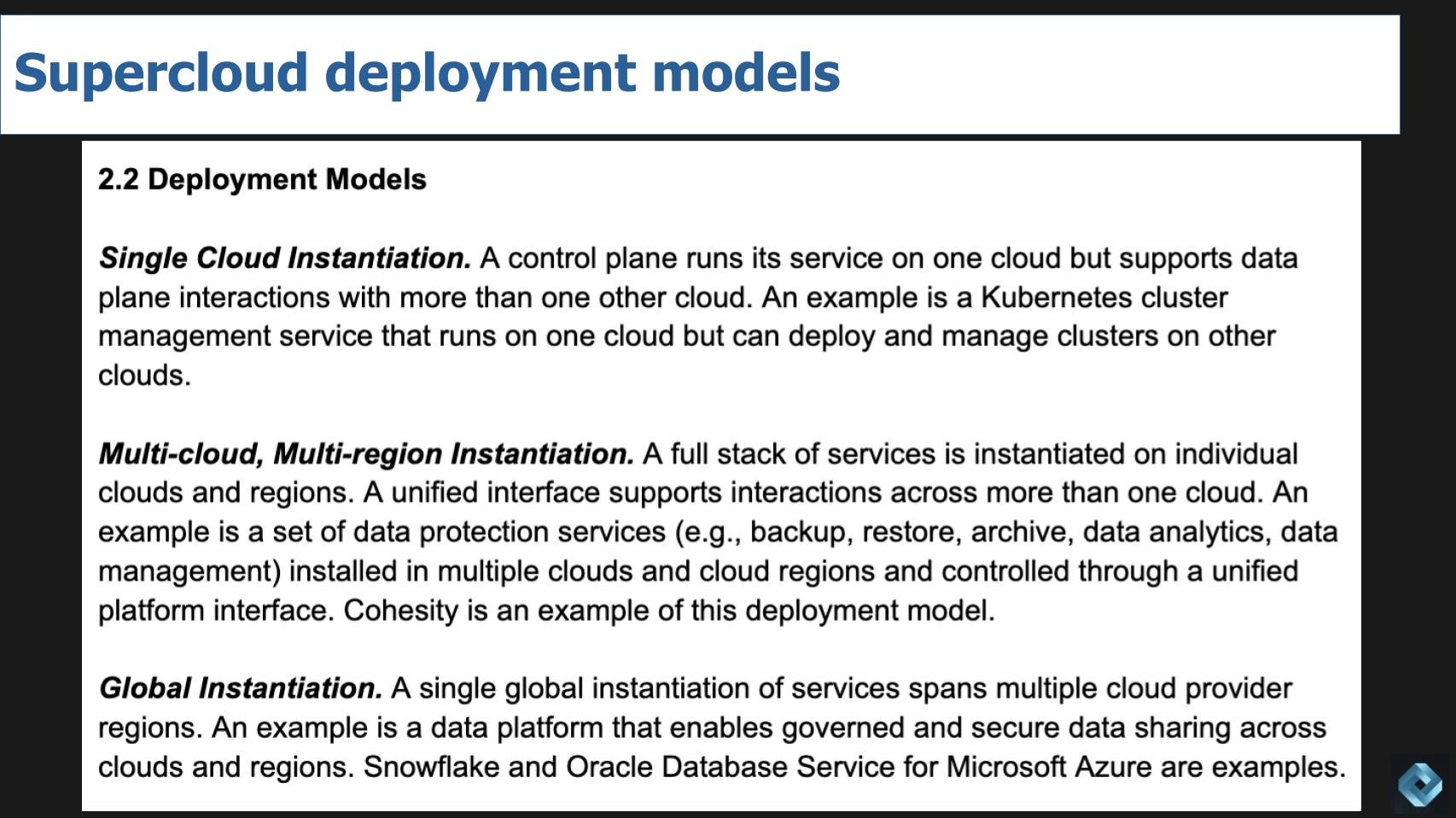 Single cloud instantiation. A control plane runs its service on one cloud but supports data plane interactions with more than one other cloud. An example is a Kubernetes cluster management service that runs on one cloud but can deploy and manage clusters on other clouds.

Multicloud, multi-region instantiation. A full stack of services is instantiated on individual clouds and regions. A unified interface supports interactions across more than one cloud. An example is a set of data protection services (e.g., backup, restore, archive, data analytics, data management) installed in multiple clouds and cloud regions and controlled through a unified platform interface. Cohesity Inc. is an example of this deployment model. 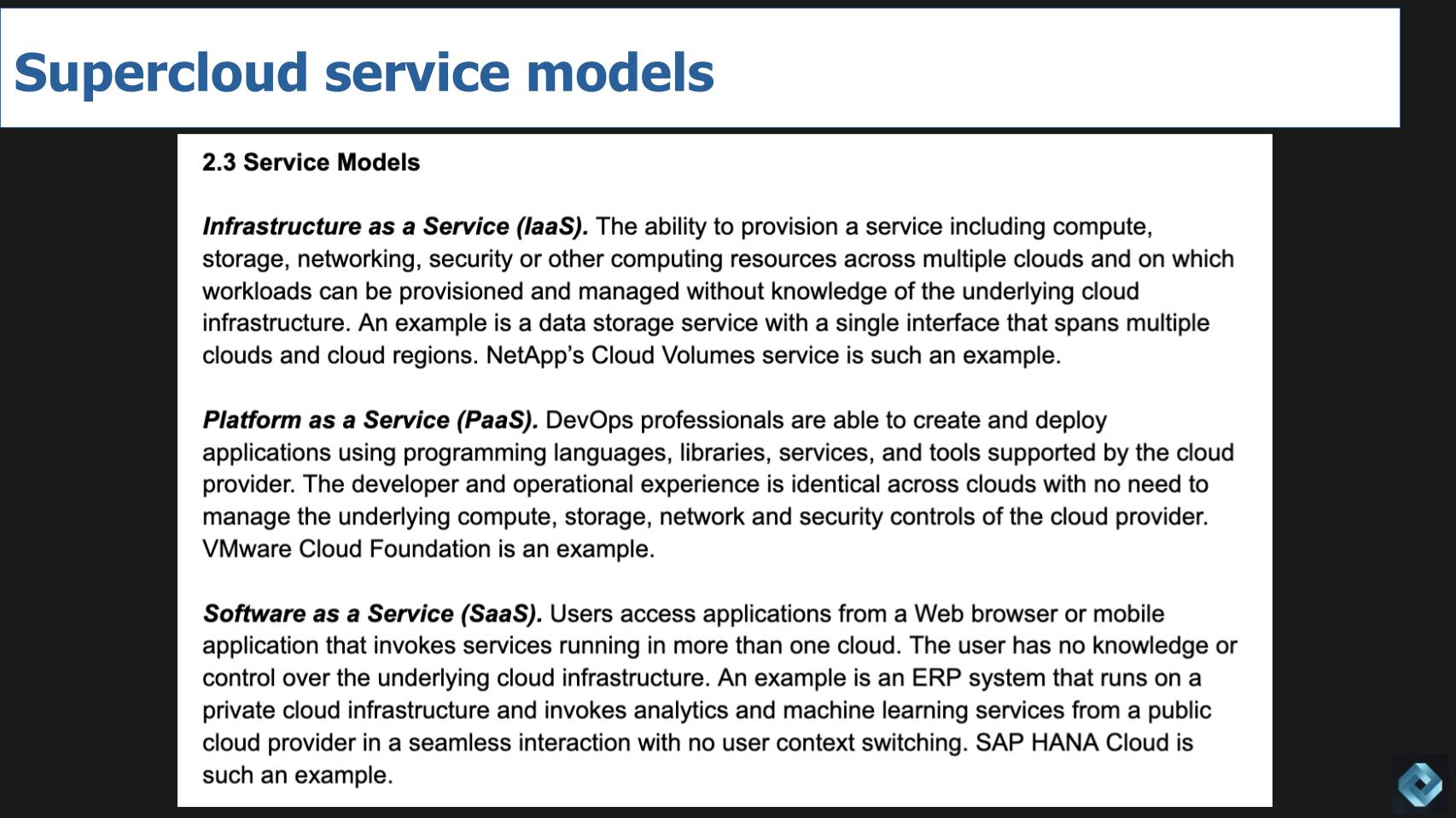 Infrastructure as a service. The ability to provision a service, including compute, storage, networking, security or other computing resources across multiple clouds and on which workloads can be provisioned and managed without knowledge of the underlying cloud infrastructure. An example is a data storage service with a single interface that spans multiple clouds and cloud regions. NetApp Inc.’s Cloud Volumes service is such an example.

Platform as a service. DevOps professionals are able to create and deploy applications using programming languages, libraries, services and tools supported by the cloud provider. The developer and operational experience is identical across clouds with no need to manage the underlying compute, storage, network and security controls of the cloud provider. VMware Cloud Foundation is an example.

Software as a service. Users access applications from a Web browser or mobile application that invokes services running in more than one cloud. The user has no knowledge or control over the underlying cloud infrastructure. An example is an enterprise resource planning system that runs on a private cloud infrastructure and invokes analytics and machine learning services from a public cloud provider in a seamless interaction with no user context switching. SAP SE’s HANA Cloud is such an example.

VMware’s push into supercloud: What to expect at VMware Explore 2022

What can you expect at VMware Explore 2022? Along with what will be an interesting and speculation-filled gathering of the VMware community, we believe VMware will lay out its future architectural direction and we expect it will fit the supercloud definition we just described. 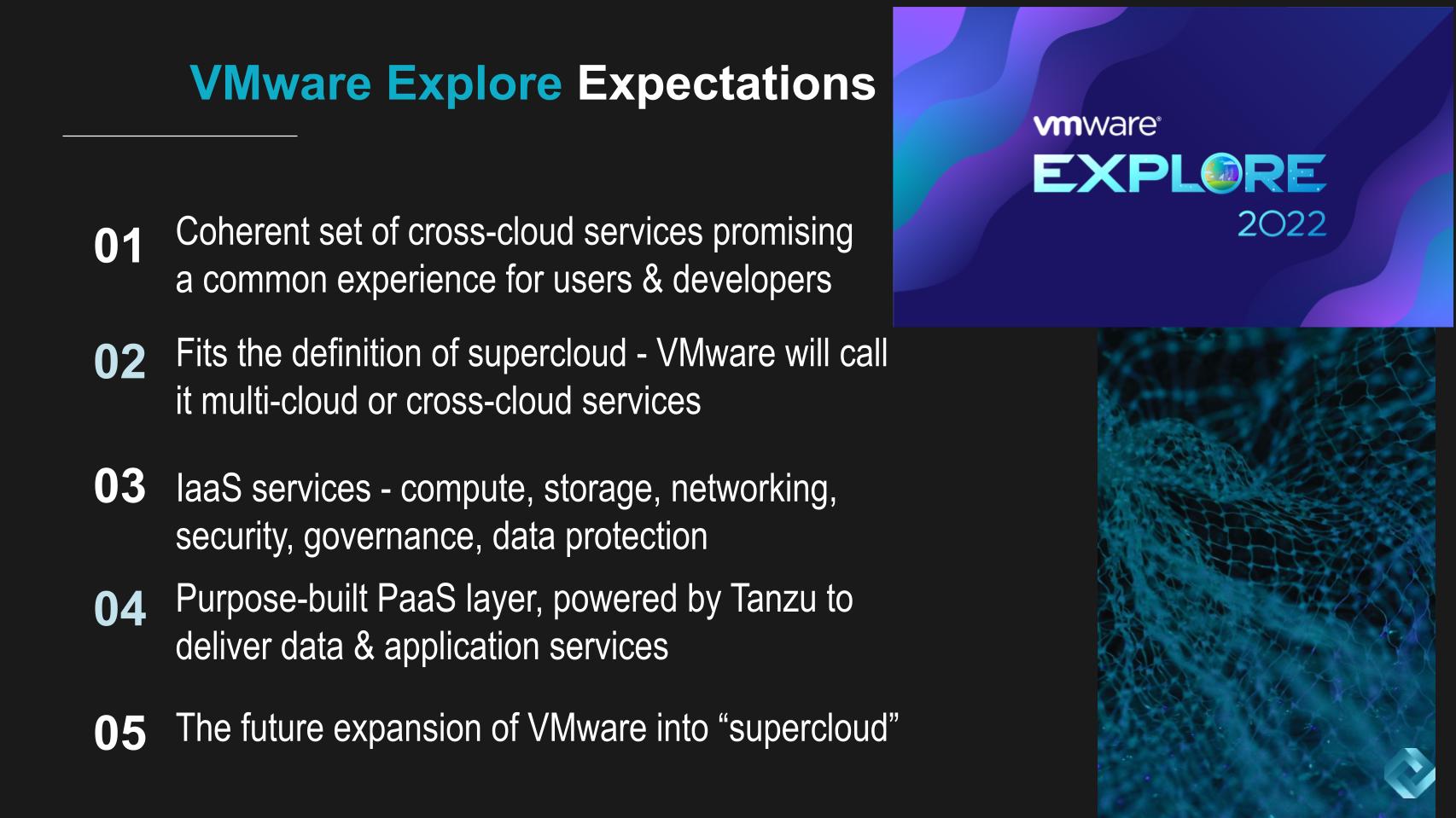 We think VMware will show its hand on a set of cross-cloud services promising a common experience for users and developers. We don’t expect VMware to use the term supercloud, but it will be a cross-cloud, multicloud services model.

We expect VMware will discuss a comprehensive suite of services including IaaS, comprising compute, storage and networking with a strong emphasis on security, governance and comprehensive data protection services.

Very importantly, we believe Tanzu will play a leading role in any announcements as a purpose-built PaaS layer (what we call a superPaaS and a cloud interpreter) specifically designed to create a common experience across clouds for data and application services.

We believe VMware will discuss its most significant offering to date in cross-cloud services in a coherent manner that brings together sets of tooling which generally was viewed as separate offerings. And we believe this new positioning will place VMware in a leading position within what we call supercloud.

Spending on supercloud will surpass $100B by next decade

While it remains to be seen what Broadcom intends to do with VMware and how disruptive the acquisition will be to VMware’s supercloud/cross-cloud services journey, we think supercloud is a substantial market opportunity. Specifically, if you don’t own a public cloud – and very few companies in the tech business do – we believe you’d better either be supporting the build out of superclouds, with tools, or building one yourself on top of hyperscale infrastructure. And we believe that as cloud matures, hyperscalers will increasingly eye cross-cloud services as an opportunity. 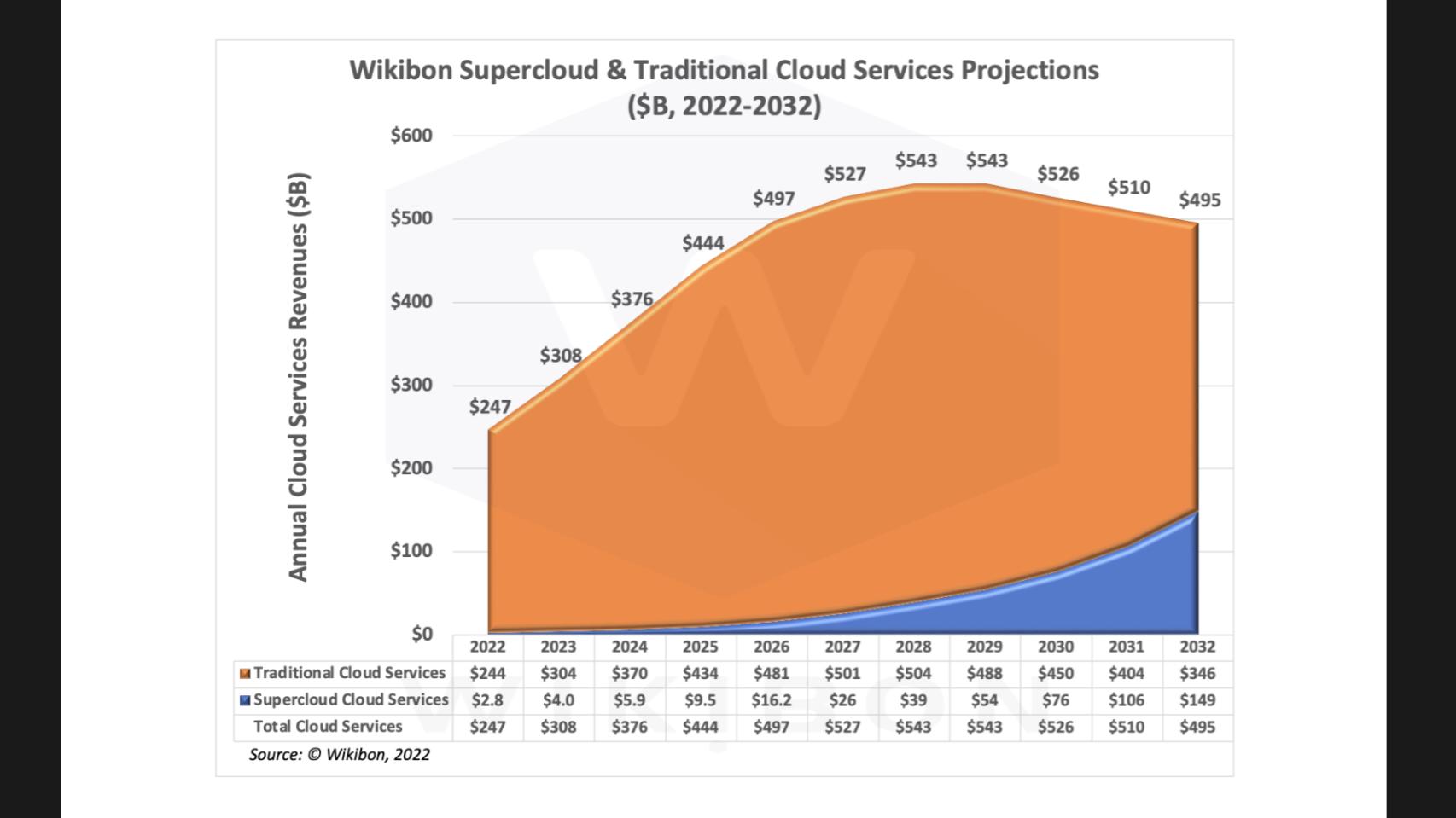 We asked David Floyer to take a stab at a market model for supercloud. What he did is take known players in cloud and estimated their IaaS and PaaS cloud services total revenue, and then took a percentage that fit the precise supercloud definition. He then added another 20% on top to cover the long tail of “other,” which over time will likely grow to 30%.

Consider this a first look at the market opportunity.

By the definition we just shared above, supercloud revenue is estimated at about $3 billion in 2022 worldwide, growing to nearly $80 billion by 2030. We believe it will surpass $100 billion early next decade.

Overall cloud service,s including supercloud, peak by the end of the decade. But supercloud continues to grow and will take a higher percentage of the cloud market. The reasoning is that the market will change and compute will increasingly become distributed and embedded into edge devices such as automobiles, robots, factory equipment, etc. And it will not be sold only as a discrete component that is consumed via services such as Amazon Web Services Inc.’s EC2. This will be a key shift to watch in spending dynamics and computing economics and is being led by Arm-based silicon innovations.

Whether the edge explosion becomes a seamless part of supercloud is a topic for another day.

This is how we see the current and future state of supercloud and we’re committed to keeping the discussion going with an inclusive model that gathers input from all parts of the industry.

Thanks to Alex Myerson and Ken Shiffman, who are on production, podcasts and media workflows for Breaking Analysis. Special thanks to Kristen Martin and Cheryl Knight, who help us keep our community informed and get the word out, and to Rob Hof, our editor in chief at SiliconANGLE.

Remember we publish each week on Wikibon and SiliconANGLE. These episodes are all available as podcasts wherever you listen.

Also, check out this ETR Tutorial we created, which explains the spending methodology in more detail. Note: ETR is a separate company from Wikibon and SiliconANGLE. If you would like to cite or republish any of the company’s data, or inquire about its services, please contact ETR at legal@etr.ai.

All statements made regarding companies or securities are strictly beliefs, points of view and opinions held by SiliconANGLE media, Enterprise Technology Research, other guests on theCUBE and guest writers. Such statements are not recommendations by these individuals to buy, sell or hold any security. The content presented does not constitute investment advice and should not be used as the basis for any investment decision. You and only you are responsible for your investment decisions.